So we’re doing something else on Bright Water.  Shocker.

Several people in Asia cook with small gas burners and have developed a terrific cooking method.  First, you buy something called a Thermal Cooker.  It’s expensive.

We bought a Thermos brand Shuttle Chef off Amazon.com.  It came out of the box with Japanese stickers all over it to prove its authentic Asianess.

You can cook anything wet in one of these: rice, stew, soup, more soup, etc.

Nancy is browning the chicken left-handed and stirring the stock right-handed.  Do not try this at home.

Once it’s all together you boil the whole thing for a few minutes to make sure it’s all hot.  You boil the stew/soup/rice in the special pot. 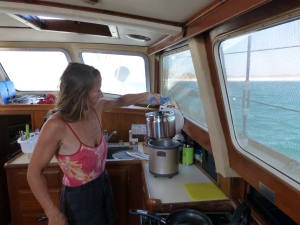 Then you turn off the burner, put the lid on the pot and the pot in the insulated outer pot.

Then you close the lid on the outer pot and put the whole thing in the sink so it doesn’t fall off the counter and roll around the galley.  You can skip this step if you’re cooking in a catamaran or a house.  In three hours dinner is cooked to perfection without fail.  You can leave everything in there almost forever.  It won’t overcook.  Eventually, however, it will need to go in the refrigerator so you don’t get ptomaine poisoning. 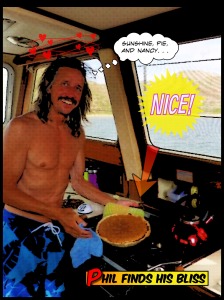 You cannot cook a pie in a thermal cooker.

There seems to be some sort of misunderstanding.

There are fish camps all up-and-down the Baja coast, both on the Pacific (Out) side and the Sea of Cortez (In) side.

The fishermen stay in these camps while they fish from their open pangas, returning to their towns or villages periodically to deliver their catch, renew their provisions, and see their families.  The fish camps are lightly built but are complete with cooking, living, and sleeping areas.  They also have generators and chest freezers to preserve food for eating and fish for later sale.

Bad weather inevitably destroys these camps, washing everything out to sea.  Heavy things sink, light things float, and the chest freezers wash ashore on various beaches through-out the area, including the southern coast of California.  Then the press gets ahold of the story, changes a few details and mis-interprets some data, and we hear about huge rectangular bundles of Mexican Reefer (or square grouper, or grass bales, or marijuana) washing ashore.

So, in the future, we need to call the beach findings by their real, but less colorful name:  Mexican Chest Freezers. 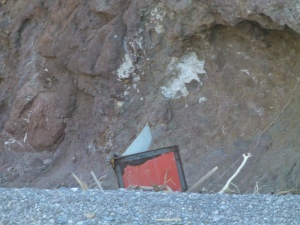 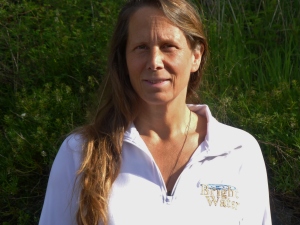 As you may remember from this post: A New Arrow for the Quiver, “Arrows” are sails and the “Quiver” is the collection of sails.  Just go with it.

We had no spare sails on board, but we were rolling in dough from selling off all the boat stuff that we accumulated in the last several years.  Craig’s List called. 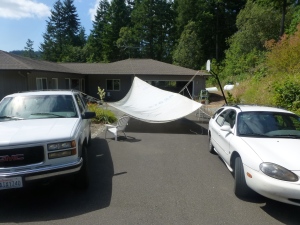 We washed it and hung it using the nearby professional canvas laundry facilities.

Despite being very old and worn, this sail is in good shape, has partial battens so it stores well, and should make a great spare sail.  Cheap, also. 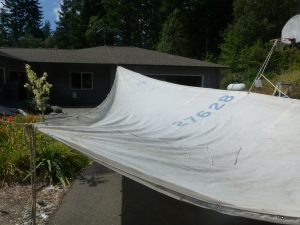 It looks like the bolt rope has shrunk (as they do) creating a huge belly at the luff of the sail.  We may remove the bolt rope and re-attach it once we get back to the boat and the sewing machine.  We may not.

We also got a good buy on a used but very serviceable genoa off a Valiant 40.  The spreader patches were in the wrong place, and it was too big, but no worries.

We had North Sails in Seattle cut the sail to fit and clean up the sun-shade (blue) sewing.  They cut off the old #6 luff tape and luff pad and installed a new #5 luff tape to fit the Profurl reefing system (edit:  it looks like the #5 is wrong and the #6 is correct – hopefully we can get them to fix it quickly // edit of the edit:  North Sails sent me a link (http://www.profurl.com/images/info_pages/supportech-classic-elite42-59.pdf) in French where Profurl clearly uses #5 luff tape, so we’ll leave the sail that way and take the #6 tape to Mexico in case we need to re-sew it there) and shorten the luff slightly.  Since we don’t race or even care very much about sail shape, we didn’t spend the extra money to install a new luff pad.

The fabric on the new-to-us jib is crisp and slick and pretty clean.  After re-sizing, this sail is only 10% smaller than our old sail.  It will become our new working jib and the old sail will be moved to spares. 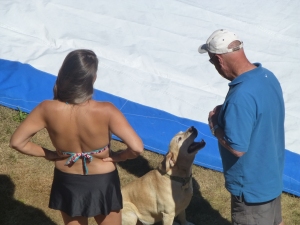 Nancy was trying to explain how luff padding improves the shape of a partially furled sail to Daisy-the-Lab and WSCOTY Art Wiper, but they kept goofing off.  Slackers.

Beth Leonard and Evans Starzinger are giants in the cruising world (Nancy, it won’t surprise you to learn, has met them), and Beth’s book is a vital reference for anyone thinking about offshore cruising:

It’s a data-driven review of cruising yacht selection and outfitting.

But (and this is a big butt), in the FAQ section of their website, we find this unexpected question and answer:

71. Have a question… I see you did a lot of high latitude sailing… how do you compare it to the tropics?

When we were crossing the Pacific on our first circumnavigation, we were in Fiji and had spent the past year in the tropics. Evans woke up one morning, looked at me, and said, “If I never see another sandy beach with palm trees in my lifetime, that would be fine.”  To me that sums up one of the things we liked least about the tropics: they are much the same all the way around the world…

They then go on to explain how cold water is full of animals, cold oceans are emptier, more of the globe is cold, there’s more adventure past 40°, yada yada yada.