After an unbelievable two weeks of drama and a significant amount of help from our friends and family, we’re finally adrift.
Well, anchored. Afloat and anchored. That’s the point. Everything works, including the watermaker, which is great. 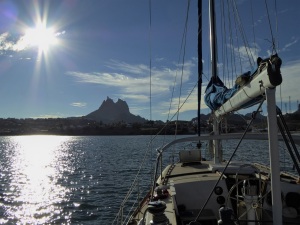 We splashed the boat this morning, got some fuel, and motored about 20 miles to a beach in San Carlos. We’re anchored here for the night, finishing some last-minute internet bidness, packing crap away bidness, and sleeping without bugs bidness, then we’ll cross to Baja early tomorrow morning. 90 to 100 miles of very, very calm winds, we think.
So we’ll be out of touch for a while, but you can always reach us on the Iridium phone. New number this year, all the boat cards are wrong. The kids have the right one.

The People’s Republic of Seattle hates cars. It’s not subtle. For instance, they build 40-room dormitories in residential neighborhoods without parking spaces. They build choo-choo twains without Park & Ride lots at the stations.

Their latest development is an electronic-concertina-wire gauntlet on I-405, the only road out of town. Flashing strobes, weirdly painted carpool lanes, changing electronic signs – all completely impossible to decipher at 65 mph in the dark. We did our best, but we may get arrested when we return. Hard to say.

We crested the pass right at sunrise and had a beautiful drive through the Palouse as the sun came up, listening to unfamiliar radio stations. NPR says new money is flowing like water to the presidential candidate that wants revolution to establish a National Socialism, following the Nordic model. We need to thwart the dastardly bankers or something.  That should turn out well.

Our annual Fall attempt to find new doctors and a new medical insurance plan is going faster this year, since there’s fewer choices all around. Soon it will be very, very simple. Might be difficult actually getting medical care, though.

Also, our society has become enough of a freak show that Berkeley Breathed forced himself out of retirement and Bloom County is back. Free on Facebook and other parts of the innertubes, I’m sure. Opus and Bill are running for President, and they’ve identified their wedgie issue.

We use our Garmin chartplotter with intergrated overlaid RADAR to figure out where we are, and we have a completely separate PC based system with it’s own GPS and chart set.

In Baja, however, we primarily navigate by eye, because the charts are off by a lot (https://svbrightwater.wordpress.com/2013/02/26/finding-puerto-ballandra/). Superimposing the RADAR image on the chart is a big help, but it’s still a problem.

On the laptop, we use an open-source free program called OpenCPN as a chartplotter. They recently developed the ability to “harvest” “photo charts” from Google Earth, also for free. The best directions on the web to do this were put together by our friends the Hacking family on Ocelot: http://hackingfamily.com/Cruise_Info/Equipment/KAPFiles.htm.

Here’s what the basic charts look like. Notice that Pt. Ballandra is way, way, off. 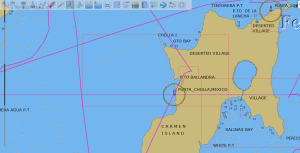 We are able to grab an image from Google Earth and create a fake chart called a KAP file. Notice it’s located correctly.

We can grab images at any resolution by controlling the “height” on Google Earth, and the detail KAP charts also index flawlessly. We can also see the recent washout in the bay, and the resulting new shoal areas within the bay that almost caused us to go aground last visit.

We use a free program called Ugrib to get our wind and wave forecasts. Typically we just look at the wind, in 3 or 6 hour increments, overlaid on the OpenCPN charts. The standard wind notification uses arrows, pointing in the local wind direction. A long barb on the arrow is 10 knots, a short barb is 5. 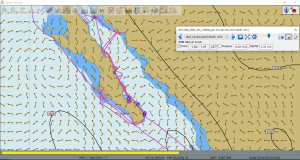 OpenCPN added a new feature called “Particle Map” that adds colored bits that flow around the map following the air flow. It makes the map prettier, but it also makes it easier to see that this weekend might be a great time to start a trip from La Paz to San Diego – you could sail the whole way on one tack. 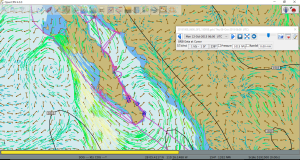 Paying for Mexico car insurance. Thanks for asking.