No matter what condition our condition is in, we work very hard to see that the boat is shipshape before we go to bed. Dingy on deck or in the davits, cabin cleaned up, engine room clear and engine ready to run, etc.

It paid off last night. High pressure over Todos Santos, on the Pacific side of Baja, leaked over the lowlands through La Paz, blowing north into south-facing Bahia San Gabriel, where we were anchored. This is called a “Coromuel,” apparently after Admiral Cromwell (https://en.wikipedia.org/wiki/Coromuel). After we finished watching “Oceans 12,” we meer-catted out the companionway and found ourselves being blown onshore by 15-20 knot winds. Earlier, our anchor had been hard to set, dragging over 100 feet before catching, so we weren’t that excited about staying up all night to see if we would be blown onto the beach.

Our neighbors, including a Mexican Navy boat, were making the same discovery and decision. In 15 minutes we were underway, making for a harbor two hours south with some protection from south winds. 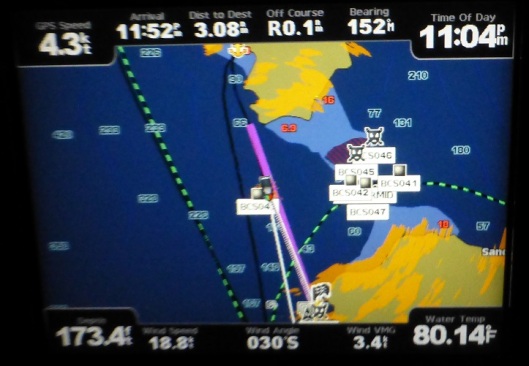 Morning found us well-rested and comfortable in Puerto Balladra, on the La Paz peninsula. We expected to see the Ryan Ovenell family, but they weren’t there. 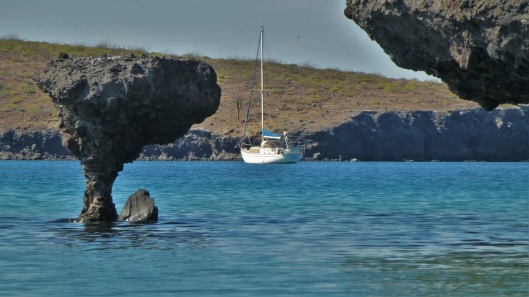 A local traveler greeted us at breakfast, slapping the hull repeatedly.

Like us, she summers in Puget Sound and winters in Mexico. We discussed the election and she shared her dismay at Seattle’s over-influence in the state’s operation.

Then she asked the mermaid to go swimming with her. Apparently a notice had been received. GoPro video to follow, if we can figure out the bandwidth issue. 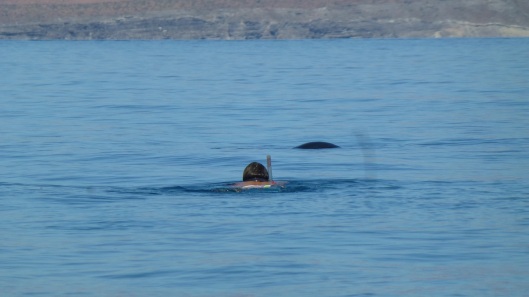 When Bright Water was anchored in the Pacific Mexico open-ocean bays of Puerto Vallarta and Tenacatita, there were several days where the wind died and we wallowed in the swell, rolling from side to side, sometimes violently.

So we bought a set of four Davis Rocker-Stoppers at a marine garage sale in Seattle. We didn’t pay much and we didn’t really think we’d need them.

But when the seasonally extraordinary winds caused the swell to wrap around into the anchorage at Isla Coronados, we got the plastic cones out of the lazerette.

Davis wants you to rig them off the rail, and many people rig them off the end of the boom, but we used the whiskerpole and rigged them as far from Bright Water’s centerline as possible. It’s all about leverage. Also, the topping lift pulley wouldn’t have been fair if we used the boom and I was worried the line would chafe through. Using the spinnaker halyard to lift the end of the whiskerpole was better, I think. We rigged fore and aft guys to keep everything quiet.

We used a 10# weight belt on the bottom end of the rope, which was more than enough weight. The effect was instant and awesome. Even though Davis recommends 8 cones per side = 16 cones for a boat our size, we think four rigged this way is adequate. Bigger ocean swells may eventually prove us wrong.

You can see the sardine school in the lower right corner.

Not that it mattered, or that we could have done anything about it, but we checked the Eastern Pacific Tropical Forecast before we left for a short boat trip on Puget Sound Sunday afternoon. Hurricane Odile was still supposed to pass up the outside (Western) shore of Baja, and while the peninsula would get a little too much rain in a little too little amount of time, all was well(ish).

So when we got a call Tuesday morning asking if Bright Water was OK, we were unclear what had happened.

Odile slammed into Cabo San Lucas as a Category 3 (the strongest hurricane there since satellite monitoring), then moseyed on up the land, wiping out everything in it’s path. Communications seem to have suffered, but the word is that nobody was killed. All or most of the common “tropical” tin and tarpaper housing is demolished. I’m sure there’s a lot of broken boats and marinas. There is a lot of work to do there.

EDIT: The best quality rumors are being collected by Holly on the Charlie’s Charts facebook page, and on Latitude38.com. It looks like there was very little yacht damage in marinas or dry-stack yards, with a few significant exceptions. Several yachtistas are still missing in La Paz, but they would have been washed onto the island (the Mogote) when/if they abandoned ship during the storm and may be living in houses on the island (see below).

One friend rode the hurricane anchored in Bahia Marquer (BM on the map), near Loreto. They suffered very little damage and only dragged their (massive) anchor 100′ or so. The “hurricane hole” of Puerto Escondito, just a few miles away, was torn apart as moorings failed and loose boats swept into other boats, creating a cascade of destruction.

Another friend rode the storm out in Bahia Don Juan (DJ). The slightly lighter winds (35-40 sustained, with higher gusts) and well-protected anchorage worked out and they didn’t suffer any damage, although they had to re-anchor three times in the deep harbor.

Bright Water is on the hard in Guaymas (BW) on the mainland. They got less than 1/2 inch of rain and the winds were under 30 knots, so I’m sure we’re fine.

Two people were killed in Puerto Vallarta as the storm swept north. Ironically, we have friends staying there. Someone was swept off the seawall in front of their hotel, then washed up dead 1 1/2 hours later. Crazy. 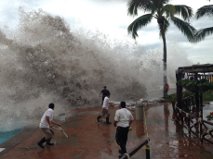 Now Odile is bringing too much rain in too short of a time to Arizona and New Mexico. I don’t know if that will effectively end the drought there, but it should fill the reservoirs. Hopefully it doesn’t fill the reservoirs with the mountains. The erosion will be epic in some areas.

Ya’ll take care of each other.

Edit: The yacht Princess sunk in La Paz during Odile, taking it’s owner down with it. Gunter was a fixture in La Paz, an icon. Gunter ran the morning radio net every Friday with grace, a loose hand, and a quiet but clever sense of humor that appealed to everyone. Often, after the net (which always ran long), he would tell a story of his own. Those stories probably cost La Paz as cruisers stayed on their boats and listened to their radios instead of attending to commerce and, you know, cruising stuff. We hope Gunter finds rest.

Last October, we installed a 5/8 stainless bow eye (a U-Bolt, really, but we’ll keep saying eye) in Bright Water’s bow to give us a water-line-level point to anchor the anchor rode.

Now for the follow-up. We used a 1/2″ x 25′ nylon dock line as our anchor snubber line, attached to the bow eye simply by looping itself through the spliced eye.

Despite our best intentions, this attachment method caused the rope to constrict so tightly around the eye that it didn’t swivel and it eventually cut itself.

This is our second line after two-three month’s use. 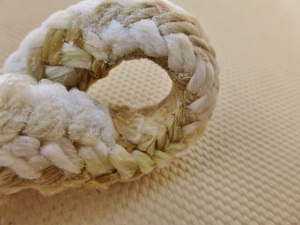 We cut the line off before it failed, but it was on it’s way out. You can see where the nylon inside the loop has actually melted and re-hardened, probably more from pressure than from heat (since it was essentially seized to the bow eye), but possibly from heat from internal friction as the line continued to tighten. 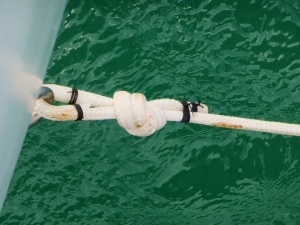 In the latest configuration, we tied a loop in the end of the line (over a nylon split thimble) with a simple back-threaded overhand knot, with the tail worked down as tight as possible against the thimble. Then we lashed all the loose bits. Using a figure 8 knot in the same place would make the knot less likely to cut the line, but … I didn’t. This knot will just continue to tighten and will need to be cut off to be removed. Fine by me.

We used this line for three weeks now in up to 40 kts wind and it swivels nicely under load, and even the cheap nylon thimble we used looks like it’s holding up fine. We’ve seen another boat with a stainless thimble and stainless shackle doing the same thing. That would have two benefits: You can remove the line easily for passages and storage, and it looks boss. However, you would have a stainless/stainless, highly loaded, and un-lubricated bearing that would rattle and squeak, and I just won’t do it. Unless this stuff fails early. 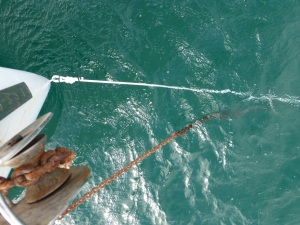 Here is the Practical Sailor article that shows why you should never, ever use less than 6:1 or 7:1 scope.

And Here is the web page where some guy with a lot of time on his hands proves that all-chain or all-rope rodes are not anywhere near as good as a mixed rode, especially the way we’re doing it. He also shows that Kellets and heavy chain don’t help in extreme holding, but Kellet and Heavy Chain People don’t listen to reason anyway. They’re helpless romantics, living in a dream world.

Our new anchoring approach creates a small void space inside the tautline hitch, around the chain links. In the Mediterranean Sea they use small glass bottles with narrow necks as Octopus traps. 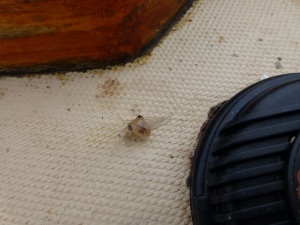 This little pulpo was clearly surprised to find herself on the deck of Bright Water.

She was a nice nylon rope yellow combined with a galvanized chain brown when Nancy first saw her, but by the time we’d found the camera she was a glowing starboard beige with gelcoat white highlights.

The last time I held an octopus (or an octopus held me) this way, my buddy Kevin and I were ten feet apart shaking hands with the same octopus in Hood Canal, 60′ down. This time was just as cool. Ten seconds later she returned to the sea. I still miss her.

If you want your anchor to hold in a blow, only one thing really matters: Scope.  Scope is the ratio of water depth to anchor line length.  It’s a trig problem.  At wind speed of thirty knots or more, even the heaviest chain rode is pulled as tight as a guitar string.  Scope of less than six or seven to one just lifts the anchor out of the sand or mud.  Scope of more than eight or ten doesn’t help much, because you’re already pulling pretty flat.  Draw yourself a picture.

What a lot of people get wrong is that scope is figured from where the anchor attaches to the boat.  Since our bow roller is about six feet off the water, that means we need to add 6’x6=36 feet of chain, plus 6x(Water depth) when we anchor.  More chain means more swing radius means more chance for mayhem.

So we added a 1/2″ U-Bolt to the Bright Water pointy end. 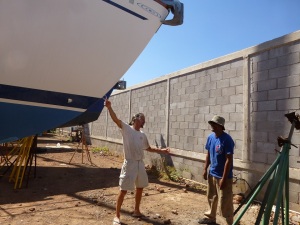 Martin and I discuss how much easier it will be to load Bright Water onto the trailer.

We lead the nylon rope up through the bow eye and attach it to the chain with a tautline hitch.  It’s not trivial to remember which way the load goes and how the knot flows.  We throw a little safety half-hitch around the standing lead.

Once we pay out another 25′ of chain, the load goes into the nylon line.  It acts as an elastic snubber as well as reduces our swing radius.  A standard snatch hook on deck is our secondary attachment.  If the nylon line breaks there will be a loud noise and we’ll go see what happened before things get too interesting. 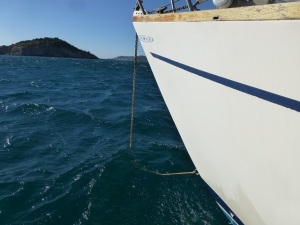 Here’s the whole thing working away in 30 kts. sustained in front of the Soggy Peso bar in San Carlos.  Another benefit is that the long snubber keeps the bow/V-berth a little quieter by isolating the chain/anchor noises.

There’s not much of a backing plate on the bow eye, but the glass is over 1-1/2″ thick. I’m not too worried about it pulling through.