We left Guaymas/San Carlos and headed north, looking for empty anchorages and warm water. Unfortunately, the warm water is long gone, but light winds meant we could visit anchorages not available in the winter.

Isla Partida is a tiny island in the north sea, with a small harbor open to the north. The island has very little plant life, and the surface is hard rock and caliche (or something). There were also areas where everything was pumice. Interesting to walk on. 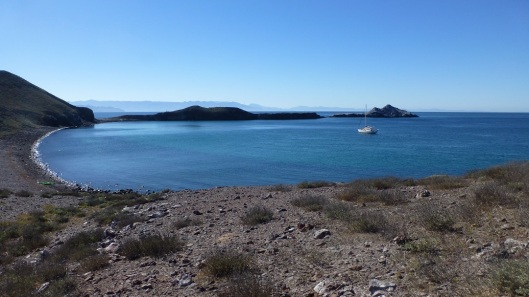 Many of the southern-facing beaches that we’ve visited have been cleaned off and shortened up by what must have been crazy-big waves during Hurricane Newton. All the small gravel, sand, and beach-combing treasures are gone. Only big round rocks remain.

There was a small whale skeleton on the beach inside the bay. We’re pretty sure this is the jawbone of a baleen whale.

The charts for the Sea of Cortez are a disaster, and we rely on guidebooks and our captured (KAP) Google Earth photographs we built in to our OpenCPN system. However, there are still discoveries to be made. We dingy’ed right over this surprise reef while fishing, and were really surprised to later see the end of it drying at low tide. The yellow track was our path into the bay. We just missed the rocks.

I also got bit by a death-eater fish. Broke the skin and everything, but it’s healing nicely. Thanks for asking.

Puerto Ballandra is one of the most beautiful places in the world.  It’s incredibly easy to find, mostly. 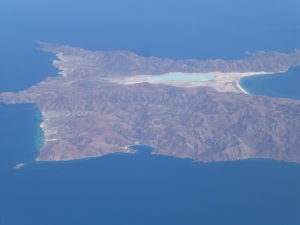 It’s the little round harbor at the bottom of this island.  Super easy to find as you fly over it going south from LA to La Paz. 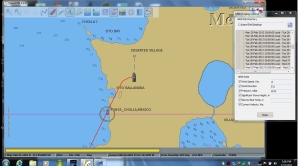 It’s easy to find by boat, too, until you look a little closer at the C-Map on your PC chartplotter and find that you accidentally anchored well up a little hill.

A closer look at the Garmin chartplotter shows a similar problem.  The light tan is the charted island, and the dark tan is the radar-indicated actual shoreline.  Since the Garmin and the C-Map agree, there must be a problem with the GPS equipment.  Somebody should call the Air Force.

But wait, what about those anchor symbols on the Garmin Chart? 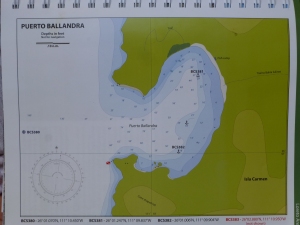 We put them there.  Shawn Breeding and Heather Bansmer spent seven years boating around Mexico and finding out where stuff really is.  Then they published two great guidebooks to tell the rest of us what they found.  Typically they provide a waypoint at the entrance to each harbor, as well as anchoring points within the harbor.  It’s completely normal for us to pull into a harbor and find a boat anchored exactly on the waypoint they provided.

…even though it is a fish story.

We blew it when we left Ensenada.  We cooked rice and added sugar and rice vinegar to make it all sticky, and we bought some nori in San Diego, but we left in a rush and didn’t get the Spam fried and the musubi made.  So no road food.

So we put out a lure and caught a tuna.  Skipjack, maybe.  Whatever kind of tuna that takes the lure right after you give up and find something else to do.  Very, very easy to filet, by the way.  Very soft bones.

Fresh sushi in the cockpit.  Almost as fresh sushi the next day, as well.  We also had a very nice raw tuna/spinach salad with raspberry dressing.

Then we got a little greedy and decided we wanted Dorado, which is way, way better than tuna even though it’s better cooked.

But there was a little problem. 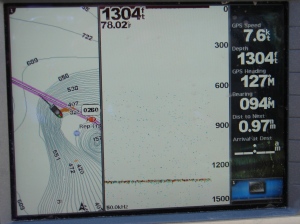 This is a shot of our split-screen plotter/depth sounder.  The chart plotter shows we should be at about 450 feet, climbing an incredible sea-mount in the middle of nowhere.  The actual depth is shown on the right.  Clearly the charts aren’t even close.  We looked around for a while but never found any structure.

We found something better. 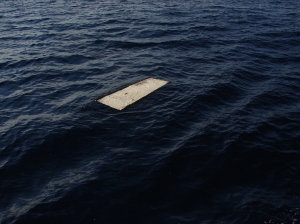 Twenty miles offshore we found this 2×4 foot piece of plywood float all alone.  An entire ecosystem had formed on the plywood. 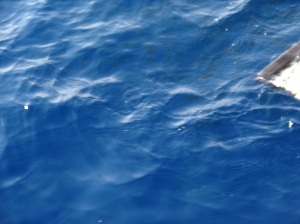 So we dragged our lures next to the board for an hour and a half or so.  We caught and boated two wahoo, and hooked and snapped off two four-foot dorado.  We need bigger fishing stuff.  A huge school of dorado would follow whatever we hooked right up to the boat.  They’re incredible underwater, blue and green flashing, but without a polarized filter on the camera the pictures didn’t turn out.

The wahoo is good, like fresh-water perch, but not as good as dorado.  Good tacos, good fish sandwiches.